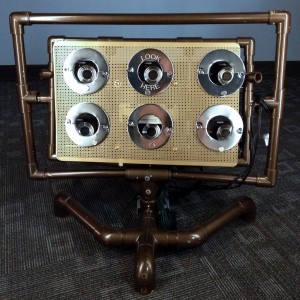 I was recently asked to build “something fun” for a science museum event.

Since I was already waist deep in the world of photogrammetry at work (the reconstruction of 3D data from photographs), I decided to build a camera rig for capturing the faces of the visitors (mostly kids). Now if you have kids, or have ever seen a kid on TV, you know that they very rarely sit still for more than 0.25 seconds unless they are sleeping or in an Elmo-induced hypnotic trance… though even that lasts for only about 0.58 seconds. How then, can kids be photographed from multiple angles simultaneously?

Hmm… we could get a super high speed camera (let’s say 10,000 frames per second), put the child on a stool in front of the camera and spin him really fast! Surely we’ll get at least a few useable angles with high similarity and no vomit. The parents have an issue with that? Whatever! Little Johnny will almost certainly experience much worse, likely self-inflicted scenarios.

Fine, next idea: Purchase 6 cheap-wad digital cameras and wire them up to one trigger button. That’s it! Simple and obvious!